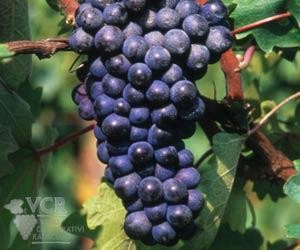 is a dark-skinned grape variety that has been associated with the Puglia region in southern Italy for at least 1500 years. Most commonly found in a blend, alongside Primitivo, Malvasia Nera, Sangiovese or Montepulciano, Negroamaro is valued for its deep color, medium-full tannins and dark berryfruit flavors. The variety can also add earthen tones that can cross over into slightly medicinal flavors. It is mildly aromatic and can produce complex wines that show characteristics of ground brown spices such as clove, cinnamon and allspice.

Puglia's Salento Peninsula is arguably the source of the finest Negroamaro wines, particularly those produced under the Salice Salentino DOC title. The warm Mediterranean-style climate here suits the variety well, allowing the vines to achieve optimum levels of ripeness. A relatively drought-hardy variety, it is rarely troubled by the area's limited rainfall.
Negroamaro Grapes
There are two schools of thought on where Negroamaro's name comes from. The first is that it is a modern Italian translation (where negro means "black" and amaro means "bitter") referring to the variety's dark coloring and savory flavors. However, the hot southern extremity of Italy is known to produce ripe red wines with high sugar levels, so "bitter" should not be taken too literally. The second school of thought employs a Latin-Greek interpretation and says it means "dark black", a reference to Negroamaro's intense color.

A little Negroamaro is grown in California and Australia, but the variety remains most closely associated with the heel of Italy's boot.

Food matches for Negroamaro include:

View all posts by: admin