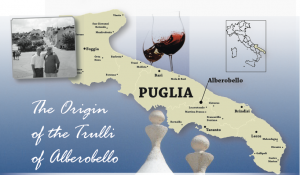 Located in Puglia, in the southern region of Italy is a small town called Alberobello. It is found inside the province of Bari. Here is where you will find the conical shaped houses called Trulli.

This territory stands in the middle of a vast layer of the earth's crust of limestone, which flakes into flat sheets of varying thickness, which has favored the development of the mysterious stone homes called Trulli.

According to archaeological studies, Trulli’s were first built in pre-historic times by tribes from the middle east and asia minor. These tribes used to erect tombs to bury their dead to shelter them from bad weather.

During the expansion of the Hellenistic culture which dominated the coast of southern Italy, the arrival of the first Greek settlers developed and embellished the Trulli. The word Trullo derives from the greek word Tholos, which refers to a circular dome-shaped construction.

Legend has it the tombs, after hundreds of years and various improvements, became homes for farmers. Eventually, newer Trulli’s arose and were built by a 16th century architect who noticed that the stones used for the Trulli (called chiancole) kept the Trulli’s cool in the summer and warm in the winter.
People today still live in Trulli’s. The little town of Alberobello draws tourists from all over the world. The larger Trulli’s have been turned into luxury hotels and trattorias. It has become a town of many souvenir stands and artisan work shops. As you walk through town, you can smell the air that carries the scent of almonds and olives.

Our staff welcomes you to Osteria Trulli! 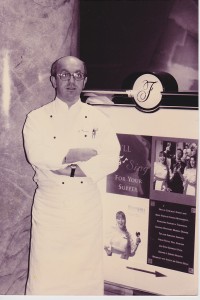 Giovanni DeNigris is a world-class chef, long-time restauranteur, and owner of Osteria Trulli in Arlington Heights. Born and raised in the Mola Di Bari area of Puglia, Italy, his passion for Pugliese cuisine has been a guiding force in his culinary endeavors since Day One. His life-long intention continues to be sharing the cuisine of Puglia, “La Cucina Povera” (cooking of the poor), with the world.

After many years cooking in kitchens throughout Italy and other areas of Europe, DeNigris moved to the United States in 1971 to pursue The American Dream. In Chicago, he helmed many kitchens including Primavera in the Fairmont Hotel, La Strada, and others. By 1999, he was proud to shift his focus to celebrate the region of Italy where he was born, as he had always hoped to do. He opened Trattoria Trulli in Evanston. Named after the dome-shaped “trullo” rooftop style distinctive of the area, Chicagoans received his ode to Pugliese cuisine with open arms. After great success in Evanston, he opened a second location of the restaurant in Logan Square in 2007. Shortly after, in 2008, he opened his third restaurant (Macello) near the Fulton Market neighborhood.

After decades in the business, DeNigris decided to retire in 2015 – But it didn’t last long. He still felt a need to share his homeland’s cuisine with the world, and thus, Osteria Trulli was born. The intimate 50-seat restaurant in Arlington Heights started as a passion project for DeNirgis, but immediately became a pilgrimage-worthy dining destination. The menu, focusing almost exclusively on traditional Pugliese preparations, pays homage to the coastal cuisine of the region and its affinity for vibrant seafood dishes, handmade pasta, and wood-fire prepared pizza, meats, and vegetables. Named a Best New Restaurant by Chicago Magazine in 2016, Osteria Trulli also received warm reviews from the Chicago Tribune, among others.
At Osteria Trulli, DeNigris remains passionate about his goal to honor the cuisine of Puglia and looks forward to continue telling stories of his homeland through his authentic preparations.